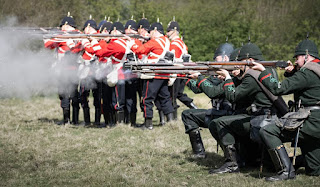 Hosted by The Victorian Association, join us at Fort Brockhurst to watch the soldiers practicing their manoeuvres, supported by the ladies and gentlemen of the town in their bustle dresses and top hats.

The event runs from 10am until 4pm on Saturday and Sunday, £1 entry per adult and child (Under 5’s free). Children’s Victorian fancy dress competition at 1:30pm both days.

The Rifle Volunteer force came into existence in 1859, and was a hugely popular civilian military movement, later evolving into the Territorial Army and again into the Reserves that still exist today.

In the later nineteenth century Easter was the usual occasion for training manoeuvres for the Volunteers. The regular army held their main large-scale exercises in the autumn, however, for the Volunteers the long weekend allowed the men time away from their civilian employment. The regular army would frequently be involved, giving both regular and volunteer units the opportunity to train alongside each other.

The Volunteer units would arrive on Friday, and Saturday was given over to drills and military instruction. Sunday began with church services, and the rest of the day was free. The main event of the weekend came on the Monday which was a “sham fight”, involving opposing attacking and defending forces, and at the end the official umpires would rule on how well the respective objectives had been achieved, followed shortly afterwards by a formal march past in review before the senior general. The Volunteers dispersed late Monday afternoon to return to their civilian jobs. All of these events were watched by the friends and families of the participants, as well as local civilians in the areas they were held – often an excuse for a family day out with a picnic!