"The Sacking of Fredericksburg" by Arthur Lumley

By the evening of December 12th, most of Burnside's Union troops had crossed the Rappahannock River and were preparing for the next days assault on the Confederate positions at Fredericksburg. On the back of his sketch Lumley, an artist for Frank Leslie’s Illustrated Newspaper, described the behavior of some of the Federal soldiers on the eve of battle: “Friday Night in Fredericksburg. This night the city was in the wildest confusion sacked by the union troops = houses burned down furniture scattered in the streets = men pillaging in all directions a fit scene for the French revolution and a discrace [sic] to the Union Arms. this is my view of what I saw. Lumley” 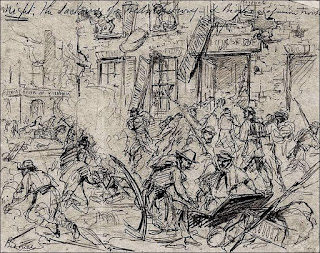