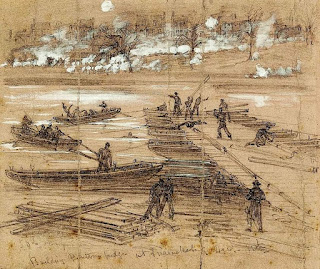 Union engineers began to assemble six pontoon bridges before dawn on December 11, two just north of the town center, a third on the southern end of town, and three farther south, near the confluence of the Rappahannock and Deep Run. The engineers constructing the bridge directly across from city came under punishing fire from Confederate sharpshooters, primarily from the Mississippi brigade of Brig. Gen. William Barksdale, in command of the town defenses. Union artillery attempted to dislodge the sharpshooters, but their positions in the cellars of houses rendered the fire from 150 guns mostly ineffective. Eventually Burnside's artillery commander, Brig. Gen. Henry J. Hunt, convinced him to send infantry landing parties over in the pontoon boats to secure a small bridgehead and rout the sharpshooters. Col. Norman J. Hall volunteered his brigade for this assignment. Burnside suddenly turned reluctant, lamenting to Hall in front of his men that "the effort meant death to most of those who should undertake the voyage." When his men responded to Hall's request with three cheers, Burnside relented. At 3 p.m., the Union artillery began a preparatory bombardment and 135 infantrymen from the 7th Michigan and the 19th Massachusetts crowded into the small boats. They crossed successfully and spread out in a skirmish line to clear the sharpshooters. Although some of the Confederates surrendered, fighting proceeded street by street through the town as the engineers completed the bridges. Sumner's Right Grand Division began crossing at 4:30 p.m., but the bulk of his men did not cross until December 12. Hooker's Center Grand Division crossed on December 13, using both the northern and southern bridges.

The clearing of the city buildings by Sumner's infantry and by artillery fire from across the river began the first major urban combat of the war. Union gunners sent more than 5,000 shells against the town and the ridges to the west. By nightfall, four brigades of Union troops occupied the town