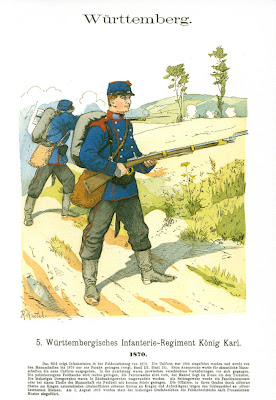 (Image is of infantry in 1870) From the wiki
In 1866 Württemberg took up arms on behalf of Austria in the Austro-Prussian War, but three weeks after the Battle of Königgratz (3 July 1866) her troops suffered a comprehensive defeat at Tauberbischofsheim, and the country lay at the mercy of Prussia. The Prussians occupied the northern part of Württemberg and negotiated a peace in August 1866; by this Württemberg paid an indemnity of 8,000,000 gulden, but she at once concluded a secret offensive and defensive treaty with her conqueror. Württemberg was a party to the St Petersburg Declaration of 1868.
German account of the battle here
Posted by Ralphus at 02:57