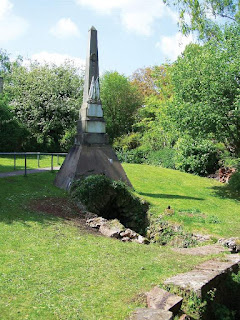 Where I live Midsomer Norton has a memorial for a Crimean war soldier William Stukeley Savage. Here's an article in the local paper about it. He was in the 68th Durham Light infantry. Here for inscription.
From the wiki
Around 1866 an obelisk monument with two marble plaques was built at the site of St Chad's Well near the boundary of the grounds, close to Midsomer Norton town centre, by the mother of Major Frederick Stukeley Savage to her son who had been injured in the Crimean War. The decision to place the monument near the spring, which had long been used by the people of the town, resulted from her son's letters home from the war. He highlighted the problems the soldiers had gaining access to clean water, causing them many deaths from waterborne diseases. Although the Major did return from the war, he was an invalid and died ten years later. The writer Evelyn Waugh whose grandfather Alexander Waugh was the doctor in the town tells how the distraught Mrs Savage visited the memorial daily. "Here, in the evenings, the pathetic, wizened Mrs Savage was conducted in her wheel chair, attended by her faithful henchman, Jonah Shearn. The path to the well was set with shrubs, and if any weed had grown between their stems, the wheel chair was stopped before the offending vegetable, and Jonah, trowel in hand, dug it up and cast it in the stream that babbled by. Then she paused and read the inscription with a far-away look in her eyes. It was her tribute to an only child".
Posted by Ralphus at 08:24