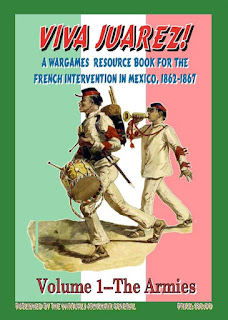 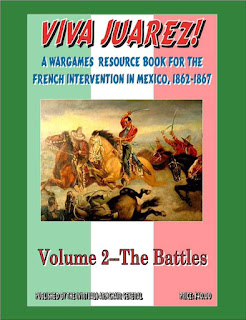 “Viva Juarez! A Wargames Resource Book for The French Intervention in Mexico, 1862-1867”

Over two years in development, Viva Juarez! is now the most complete single source for all matters military pertaining to the French Intervention in Mexico, Napoleons III's mad scheme to create a puppet Empire of France ruled by an Austrian prince.

Though a number of good English language books have been available, none have detailed accounts of any of the key battles and sieges, only generic references, and little or no Order of Battle information. Uniform data is out there, but a thorough collection of all that is available--and a number of uniforms that are not--previously took a major effort to find.

Well, that is all ended now. Viva Juarez! has it all, and then some, in two unique volumes. "Volume One--The Armies," has 62 pages of full color uniform plates, many contemporary to the events, and a good number of new ones specifically made for this project by former Disney illustrator, Nick Stern. But more than just the plates, there is full organizational information for all combatants: Mexican Republicans, Franco-Mexican and Imperialists, Belgians, Austrians, Egyptians, and, of course, Second Empire French. Color plates of weapons and their operating stats for all armies, and more, make this the single most complete source on the armies engaged. "Volume Two--The Battles" contains in its 204 pages full details of 31 actions, each with OB's and at least one period battlefield map. These maps have been reproduced in full color and printed full page size in order for the terrain and troop movements to be easily studied. Further, there is a section on Key Personages, brief biographies of some of the most influential players which can help the reader keep track of who-is-who and their affiliation(s) during the war. Twenty appendices are include for thoroughness, including a full chronology of the war, Regional OB's for different stages of the war, and organizational information on the Imperial Gendarmerie and the disposition of captured Republican Officers sent to France. Attention to Mexican topography has been taken, as well, to help illustrate it effects on campaigns and logistics with descriptions and pages of special maps.

Even current devotees of The French Intervention will learn more than has ever been available to them before. This Editor was able via the Internet to source Spanish, French, and German language books, contemporary magazines and periodicals, memoirs, and reports not previously translated to English. Besides the actual events of many battles not previously accessible, the sheer volume of contemporary photos, illustrations and maps is without precedent. Of particular value was Mexico's Mapoteca Orozco y Berra whose generous staff made available maps previously thought non-existent.

While Viva Juarez! can be read by any history buff, it is truly aimed at the wargaming possibilities. With the actual battlefield maps and detailed OB's, it is definitely possible to refight any of these historical actions with great authenticity using whatever rules are preferred. But of particular interest is the fact that most of the battles fought in Mexico can be represented on the table top with no more than 100 figures. The great sieges of Puebla, Oaxaca, and even Queretaro are possible, especially if only key actions are played, but so many were affairs were of only a few thousand to a few hundred combatants. No massive Napoleonic or American Civil War collections required here! And yet the variety of troops by nationality, uniforms, weaponry, terrain (jungles, not just desert!), quality and numbers on the table is best likened to the most exotic Colonial Wargames. There are even amphibious operations along both coasts of Mexico recounted in detail. Viva Juarez! is now the "go to" source on the subject.

Viva Juarez! is available in two volumes, each is a stand alone devoted to its topic.

Email ThisBlogThis!Share to TwitterShare to FacebookShare to Pinterest
Labels: Mexico