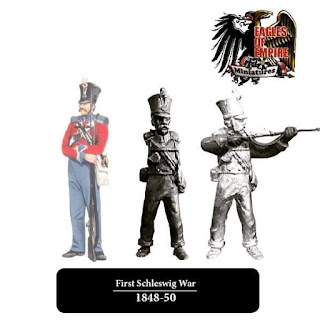 This year we celebrated the 100th anniversary of the reunification of south Denmark with the rest of our little kingdom - South Denmark is part of what originally was Schleswig-Holstein - a region that changed hands many times in history. Introducing the next range within the Eagles of Empire miniatures assortment - the First Schleswig War (1848-50) fought between Denmark and a German alliance of Schleswig-Holstein and periodically the kingdom of Prussia. A bitterly fought war with epic battles and tales of heroic sacrifice on both sides. The war was fought over the allegiance of the two north-German regions, and would finally end in a Danish victory - a theoretical victory since it solved nothing for the German-speaking majority in Holstein and South-Schleswig, thus the war would again break out in 1864, this time resulting in a monumental Danish defeat. Later after the equally crushing defeat of the German Empire after WWI time was finally right for a peaceful solution with the local population in focus. After a public vote, the part of Schleswig we now know as South Denmark was returned home to the Crown. This historical miniatures collection will commemorate the history of both sides, and hopefully cast some light on how modern Europe was shaped! Happy painting out there🙂 #Schleswig-Holstein