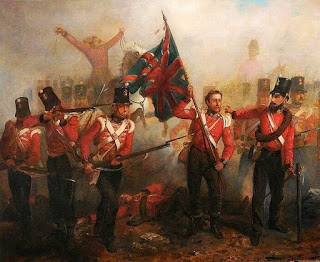 On 20 September 1854, at the Battle of the Alma during the Crimean War, Sergeant Luke O'Connor of the 23rd Regiment of Foot (The Royal Welch Fusiliers) was advancing between two officers, carrying the Colour, when one of them was mortally wounded. Sergeant O'Connor was also shot at the same time, but recovering himself, he snatched up the Colour from the ground and continued to carry it until the end of the action, although urged to retire to the rear on account of his wounds. He also acted with great gallantry at the assault on the Redan, where he was shot through both thighs. He survived, and was awarded the Regiment's first Victoria Cross for his actions that day. Luke O'Connor was born on 21 Jan 1831 in Kilcroy, Co. Roscommon. He died on 1 Feb 1915 in London