The Dordogne, 1869. Pierre Naboulet, a poor tenant farmer, has drawn a lucky number in the French Army draft lottery. He will be exempt from a five-year period of military service. But he sells his number to Florent, a rich merchant, and takes the place of Florent's son, Arnaud, who has been drafted. Woodcutting with his brother, Pierre leaves his axe in a tree to await his return home. He spends his last night in the barn with his redheaded sweetheart, Henriette... Emperor Napoleon III declares war on Prussia, and the Prussians invade. In Alsace, Pierre's regiment fights the invaders in a forest. Many French are killed; Pierre escapes, wounded. He finds a cottage. Inside a boy is hiding. The redheaded boy speaks only the Alsatian dialect of German... Written by David Carless 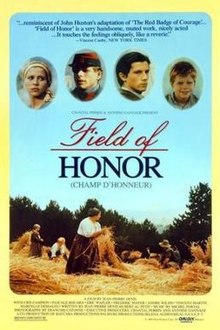 As it's the 150th why not watch this movie with English subtitles?
Posted by Ralphus at 07:07