On this day in history 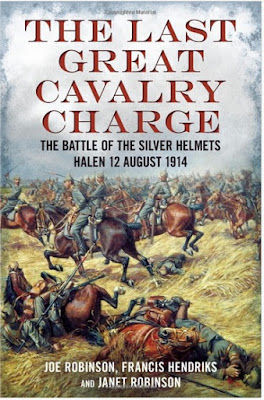 Special cheap price here
The First World War saw many changes to the way that warfare was conducted. Today, it is hard to believe that the use of cavalry was still seriously contemplated in 1914.However, the Battle of the Silver Helmets at Halen, on 12 August 1914, had been orchestrated on the previous successes of the cavalry of Frederick the Great. It was staged so that the German Fourth Cavalry Division would charge into glory with sabres rattling. Instead, twenty-four German officers, 468 men, and 843 horses were lost during no less than eight separate charges conducted on that day.
The entire right wing of the Imperial German Army included only nine cavalry brigades in the well-known Schlieffen Plan, and two of those brigades were decimated in this one battle. The battle has not been explored in detail in the English language, as it took place before the British Expeditionary Force landed in the channel ports and well before any American involvement. Furthermore, British historians have generally focused on Germany's efforts to enter Belgium through the forts at Liege, which are east of Halen. However, the Battle of the Silver Helmets destroyed a century-old cavalry tradition. An understanding of the battle explains why large-scale cavalry charges would never again be attempted on the Western Front.
Posted by Ralphus at 08:39