1st Carlist War 1833-1840
Designed by Michael Perry
28mm Figures
The first blood-bath of a civil war in Spain pitted the supporters ( the Carlists) of Carlos, brother of the recently deceased King Ferdinand VII and the Kings wife Cristina and her daughter Isabel II, hence their supporters were known as Cristinos or Isabelinos. The war engulfed Spain but concentrated in the northern provinces of the Basque region. Portugal, France and Britain had sided with the Isabalino cause and by the middle of the war had sent legions (small self-contained armies) to help. Britain contributed 10,000 men, Portugal 7,000 and France 6,000. 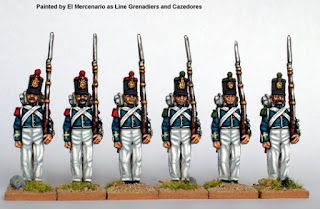 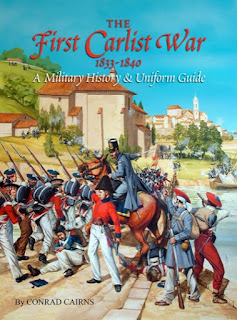 The First Carlist War was an important but often overlooked conflict that raged between 1833and 1840. It began a series of wars that ultimately led to the Spanish Civil War of 1936. This is the first book in English to cover it's military history and uniforms. 104 pages, colour throughout. It contains contemporary images, the theatres of war described, detailed uniform reconstructions, maps, orders of battle, flags and photos of miniatures.
Buy it here
Posted by Ralphus at 09:47