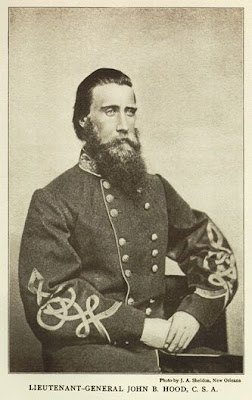 I did one of those Facebook quizzes
What Confederate General Are You?
Result: You are General John Bell Hood
You are a fearless fighter no doubt about it. But you can not control a large army. You send thousands of young southerners to their deaths. You are unfit to lead an army.
Harsh. Well noone would ever trust me with an army - but here he is depicted in the movie 'Gettysburg'. Lee apparently said of him "too much lion, too little fox," - me to a tee.