The Railway that Helped win the Crimean War by Anthony Dawson 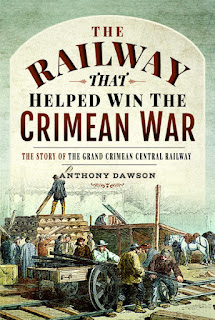 Week after week, the guns of the British expeditionary force battered away at the defences of Sevastopol, eight miles away from Balaklava, the port through which all besiegers’ supplies arrived. As autumn turned to winter, rain and frost turned the track from Balaklava into a muddy quagmire and soon it became virtually impassable.Horses were dying daily in their endeavours to pull carts up the hills to the siege lines, and with few supplies reaching the front, the troops suffered terribly from malnutrition and frostbite. Unless a solution could be found, the entire operation was doomed to humiliating, disastrous failure.When news of the terrible plight of the troops reached the UK, a leading railway contractor and his partners undertook to build a railway at cost from Balaklava to the front line – and promised that they could construct it in just three weeks after they arrived in the Crimea. Though it took almost seven weeks to complete the railway, in that time a double track which rose 500 feet from the port and travelled for seven miles to the siege lines had been laid.With food, clothing and ammunition at last able to reach the front, the British along with their French allies were able to capture Sevastopol and bring the Crimean War to an end.In this comprehensive and detailed account of the construction and use of what became known as the Grand Crimean Central Railway the author describes the astonishing achievement in building the first railway ever employed in warfare, and the first to be used for casualty evacuation, thousands of miles from the UK.
Posted by Ralphus at 05:15