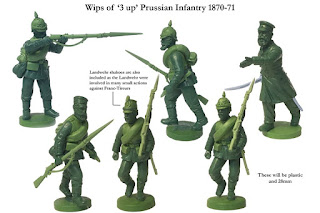 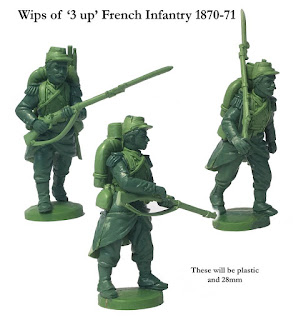 This is exciting news! This is what they say

Michael has started work on a new range of figures, Franco Prussian War 1870-71. The figures shown here are '3 up' wips for plastic Prussian and French infantry. We did make figures for this war many years ago when we started up Wargames Foundry but hopefully the style of the new ones will be better and they will be a little taller. The idea is to produce two boxes for each army utilizing the same frames in each box but with different proportions as we did for the ACW. So one of each Prussian boxes will be all advancing at trail/marching plus a frame or two of skirmishers firing/loading etc. The other box will be a box of firing line/skirmishers with a few moving up in support. The same is planned for the French. As yet there is no release date as it's still early on in their production. Most of the figures shown here will need a little more work done on them. Rifles were made by the talented Rob Mcfarlane.
Posted by Ralphus at 06:44