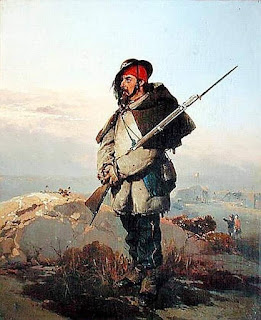 Bersaglieri in the Crimea, 1855, by Gerolamo Induno
An Italian painter known mostly for his genre works and military scenes, Induno took part in the Cinque Giornate uprising of Milan in 1848. The ensuing Austrian repression caused him to take refuge with his brother and fellow painter Domenico at Astano in Switzerland and then in Florence. Having enlisted as a volunteer in the legion of Giacomo Medici, he took part in the defence of the Roman Republic, producing numerous studies and paintings. He served with the Piedmontese detachment in the Crimea in 1855 before enlisting once again as a volunteer in Garibaldi’s brigade of Alpine chasseurs in 1859
Posted by Ralphus at 04:34