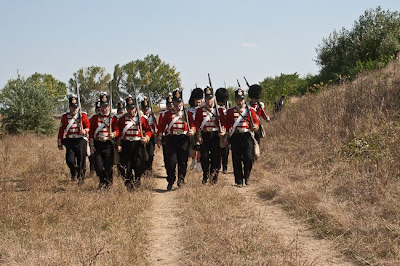 Very glad to have this account from Liudmyla - she now has her own English language blog started here
To see her photos go here
'This year Battle of Alma in Crimea, Vilino were little different comparing with reenactment event in 2010. There were two major improvements.
At first, the army of allies has grown: the Bersaglieri and 3eme de Zouaves people from France, delegates of 57, 93 and 19th Regiments of British Army from Great Britain and Ukraine, 7eme de Ligne from Ukraine 18eme de Ligne from Russia, 3eme de Zouaves from Ukraine and Artillery. From the Russian side there were Borodinskiy regiment (Russia), the Minsk infantry regiment (Ukraine and Belarus), Artillery and Hussars. This event gathered over 100 participants. The good new was that at last Allies Army's officership appeared. Before this moment there were not any centrally-controlled command in the field.
The second improvement was that this year there were manoeuvre on Saturday. It was organized by сhiefs of the clubs and organizers executives. They helped to find a very interesting large place with bridge, trenches, woods and vegetable garden :) All participants had a chance to try different re-formations under the fire.
The general reenactment on Sunday was great too! I think that was the best one among all Crimean War reenactment events. Because of the fire new field were used and performance looked very well. French and British Army kept the formation very well! Zouaves operated on the sharp end while line infantry and artillery saturated the Russian Army by fire.
That's great that new 5 years old reenactment theme id gathering more than 100 participants from all over the world in such interesting historical place like Crimea. There is a strong assurance that Crimean War reenactment will become better and better every year.'
Posted by Ralphus at 01:41