“The French army was besieging Puebla.” The simple opening words of the récit, the Foreign Legion’s standard account of its most famous battle, fought at Camerone 148 years ago today. Traditionally on Camerone Day, the récit is read to units of the Legion wherever they are and whatever they may be doing. Most famously, it was read to légionnaires serving in the doomed garrison of Dien Bien Phu only days before the French position was finally overrun.

The French text of the récit is here. The English wiki entry on the battle is here. 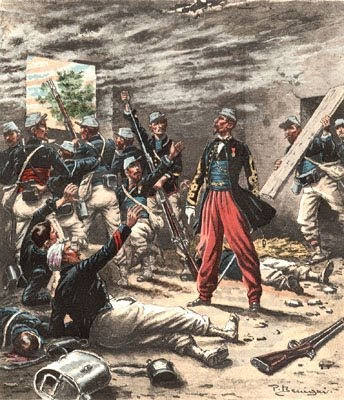 In this painting by Benigni, Captain Danjou, the French commander, calls on his men to swear to fight to the last man. 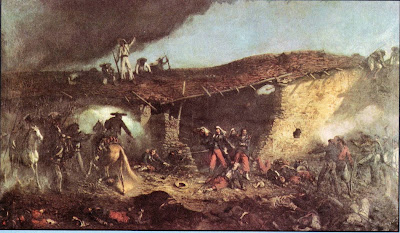 Sous-lieutenant Maudet leads the last five men standing in a final bayonet charge against the encircling Mexicans. A painting by Beauce.

Each year, the anniversary of Camerone is marked by a parade at Aubagne, the Legion’s main base in the south of France. These parades are well covered on YouTube. This footage, from the 2009 commemoration, includes the parading of Captain Danjou’s wooden hand, the Legion’s most sacred relic: