Further to Ralphus’s post of yesterday, there is a very comprehensive site on the Vickers Machine Gun here. In relation to the carriage-mounted Vickers, the site says The Regular Battalions were provided with Mk.IV tripods, while Territorial Force Battalions were issued with the Infantry Carriage, Mk. III.

I think the gun in the pictures Ralphus posted is the Infantry Carriage, Mk. III although there is no illustration on the Vickers site to confirm this. In any event, this would be consistent with the gun’s use by the Brechin Territorials, but not with its use at Landrecies. The action at Landrecies was fought on 25th August 1914, during the early stages of the retreat from Mons. The British force involved was the all-regular 4th Guards Brigade. 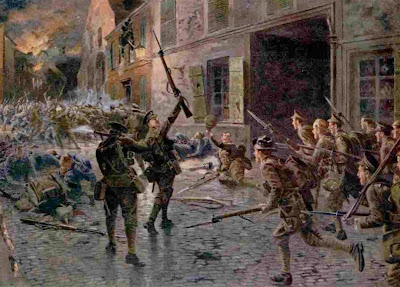 Here is WB Wollen's painting The Coldstream Guards at Landrecies.