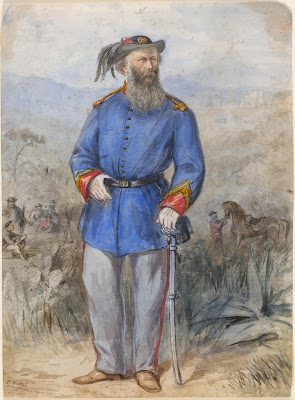 Colonel John Whitehead Peard
Messina: 1860 Nast, Thomas (artist)
A man who Garibaldi visited when he came to England and someone who led an English Legion in Garibaldi's forces.
Original water-colour signed and dated Aug. 22d 1860 by Nast; full-length figure of officer outdoors, small soldier figures resting in background. Identified as being the English Garibaldi enthusiast Colonel John Whitehead Peard.
Peard was an Oxford-educated lawyer and the son of a British admiral. He joined Garibaldi in 1860, ostensibly because of the brutality of the officials he witnessed during a visit to Naples. Peard fought in the wars of Italian unification and was awarded the Cross of the Order of Valour by King Victor Emmanuel II. Following Garibaldi’s retirement, Peard returned to Cornwall and lived the quiet life of a Victorian gentleman.
Read letter from Peard
Posted by Ralphus at 09:36