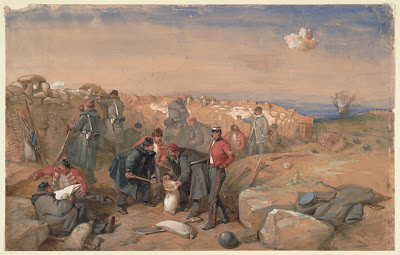 Russian rifle-pit now part of the British advanced trenches, on the left of the right attack, or Cordon's battery
1855
Simpson, William (artist)
Rifle pits appear in a lot of accounts of the Crimea on both sides. I suppose they are the beginnings of trench warfare. This image shows one very well indeed.
This description of the above image
is in this book by George Brackenbury and William Simpson

NOW PART OF THE BRITISH ADVANCED TRENCHES, ON THE LEFT OF THE RIGHT ATTACK, OR GORDON'S BATTERY.

This is one of the pits which was taken on the night of the 19th April, when Colonel Egerton was killed ; it is in the hollow between Gordon's Battery and the Redan, quite close to the Woronzoff Road. In the foreground of the drawing a group of men is seen busily engaged in filling sand-bags for the purpose of converting the pit into a trench, and connecting it with the rest of our works. In this service they are protected by a sharp fire from our rifles, directed through loop-holes menages in the parapet with sand-bags. The Russians are not ignorant of what is going on, and several round-shot lying on the ground, one of which has knocked over a gabion, and a shell bursting close to the right extremity of the work, prove how anxious they are to impede the operation. The capture of this rifle-pit is thus described by Mr. Russell:—

" Last night a very gallant and brilliant little feat of arms, attended, I regret to say, by severe loss, was performed by the 77th Regiment in front of our right attack. There is nothing more remarkable in the active operations of this siege than the importance of the part played by the sharpshooters placed in those rifle-pits, which have been dug by the enemy, and which were constructed with great skill and daring, and have been defended with vigour and resolution. The pits now constructed are complete little batteries for riflemen, and the fire from one well established, within 600 or 700 yards of a battery of ordnance, is sufficient to silence the guns, and keep the gunners from going near the embrasures. In front of the Kedan, opposite our right attack, the Russians established some capacious pits, from which they annoyed us considerably, particularly from the two nearest us on the left-hand side. Our advanced battery, when it opened, would have been greatly harassed by this fire, and it was resolved to take the two pits, to hold that which was found most tenable, and to destroy the other. That service was effected last night. About eight o'clock the party of the 77th under Lieutenant-Colonel Egerton, supported by a wing of the 33rd under Lieutenant-Colonel Mundy, moved down the traverses towards the rifle-pits. The night was dark and windy, but the Russian sentries perceived the approach of our men, and a brisk fire was at once opened on them by the enemy, to which the troops scarcely replied, for, firing a terrible volley, they rushed upon the enemy with the bayonet, and after a short but desperate struggle, drove them out of the two pits and up the slope behind them. Once in the pits, the Engineers, Officers, and Sappers and Miners, set to work to strengthen the defences, and threw up a gabionade in front, and with great coolness and courage proceeded to connect the trench of the nearest of the rifle-pits with our advanced sap." The enemy kept up a heavy fire of round, grape-shot, and shell upon them, and about two o'clock in the morning made a desperate but ineffectual attempt to regain the pits.

" It was while setting an example of conspicuous bravery to his men that Colonel Egerton fell mortally wounded. The rifle-pit is now in our hands, and a smart fire is kept up from it. Its fire is most serviceable, not only against the embrasures of the Redan, but in reducing and disturbing the fire of the Russian rifle-pits on its flank."

The next morning the other rifle-pit, captured after a feeble resistance, was levelled and filled in with earth.