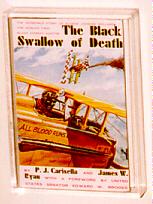 While reading 'Retreat Hell! We Just got here' - the story of the AEF in the Great War I read about this man who might make a suitable subject for a biopic. The above link gives a good version of his story - my idea for a title 'All Blood Runs Red'. Roughly his story begins; Grandson of a slave, making a living as a boxer in Paris when war breaks out - joins, like many Americans, the Foreign Legion eventually serving as a pilot. When America enters the war the experienced 300 or so American pilots were needed to create an American air corps - Bullard's call never came - because he was black. Later trumped up charges of insubordination mean that he is transferred back to the infantry. Eventually Bullard is honoured as a hero. Short piece here.

He was born Eugene Jacques Bullard in Columbus, Georgia, United States. His father was known as "Big Chief Ox" and his mother was a Creek Indian; together, they had ten children. Bullard stowed away on a ship bound for Scotland to escape racial discrimination (he later claimed to have witnessed his father's narrow escape from lynching as a child).

While in the United Kingdom he worked as a boxer and also worked in a music hall.

On a trip to Paris he decided to stay and joined the French Foreign Legion upon the outbreak of World War I in 1914. Wounded in the 1916 battles around Verdun, and awarded the Croix de Guerre, Bullard flew as a member of the Lafayette Flying Corps in the French Aéronautique Militaire, assigned to 93 Spad Squadron on 17 August 1917 where he flew some twenty missions and is thought to have shot down two enemy aircraft.

With the entry of the United States into the war the US Army Air Service convened a medical board in August 1917 for the purpose of recruiting Americans serving in the Lafayette Flying Corps. Although he passed the medical examination, Bullard was not accepted into American service because blacks were barred from flying in U.S. service at that time. Bullard was discharged from the French Air Force after fighting with another officer while off-duty and was transferred back to the French infantry in January 1918, where he served until the Armistice.