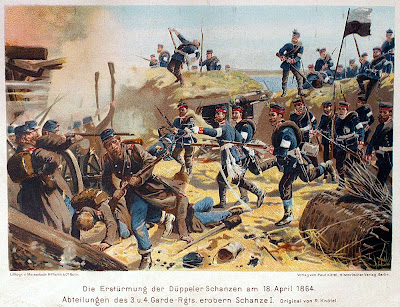 Battle fought in the 2nd Schleswig War I thought I'd post this clip of a comedy routine on hand grenades from a Danish tv show by the look of it - don't worry about the language - you don't need to speak Danish to get the punchline. Apparently the Battle of Dybbøl is celebrated every 18th April in period uniforms. Also see http://www.1864.dk/ - see here for an introductory movie
The battle saw the use of espingols - a Danish secret weapon that did pretty well. Danish army uniforms 1864