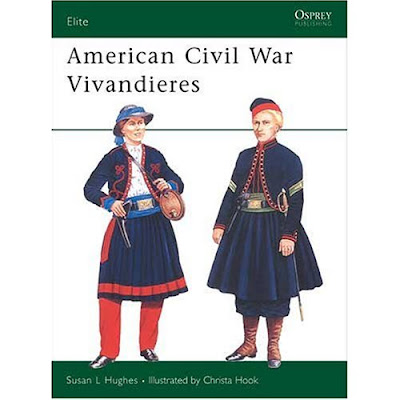 I had a query today that got me thinking - what about Vivandieres of the First World War? I don't know but had a look and there are two books coming out on this subject - one an Osprey elite on the American Civil War version and more interestingly to me Intrepid Women: Cantinières and Vivandières of the French Army (Hardcover) ~ Professor Thomas Cardoza (Author) - the blurb reads

Cantinières and vivandières were women who served as official, uniformed combat auxiliaries of French army units from 1793 to the eve of World War I. Technically non-combatant spouses of active-duty soldiers, they fought and died in every conflict from the wars of the Revolution through colonial campaigns in Algeria, Mexico, West Africa, and Indochina. At a time when women were strictly controlled by the Napoleonic Code, cantinières owned property, traveled widely, and exercised a fierce independence from their husbands. However, despite their actions, they passed largely under the radar of the growing feminist and anti-feminist movements that flourished in France from 1792 onward. Based on extensive archival research as well as published sources, Intrepid Women is the first serious book-length study of a previously ignored aspect of women's and military history.